Scotland may be the birthplace of the tradition surrounding females proposing to their partners on Leap Day yet Scottish women are shunning the opportunity to pop the question to their partners.

What should be one of the most romantic dates in the calendar fails to ring true north of the border, with research showing that less than one per cent of women in Scotland having proposed to their partners.

The distinct reluctance of the female species to take the lead on February 29 comes as something of a surprise to Tricker Bridal's Beverley Tricker. She says: “In these times of gender equality, the rate of female marriage proposals seems diminutive. Modern women living in 21st century Scotland know what they want, and if they want to move things along in their relationships, then popping the question is the right course of action.

“February 29 is as good a day as any to choose, because this date has ancient associations with love, courtship and proposals. However, a proposal of marriage remains the ultimate romantic gesture, and is a very special thing to do, regardless of what the date is, or which partner pops the question.”

Leap Day has for many centuries been regarded as the one date when women can propose to their loved one, and Scotland has deep-rooted links to the tradition.

The custom is said to have stemmed from a law enacted by Queen Margaret of Scotland in 1288. The unmarried queen made it possible for women to propose to men on Leap Day as long as they wore a red petticoat as a warning indicator to the man they wanted to pop the question to.

This origin stated that a penalty be paid by any bachelor who turned down a hopeful woman on this day; a kiss, a silk dress, or gloves. Gloves, it was suggested, were so that the woman could conceal the absence of an engagement ring. Historians have cast some doubt on this being the beginning of the tradition, claiming a lack of substantive evidence to support it.

The other popular theory suggests it started in 5th-century Ireland when St Bridget complained to St Patrick that women had to wait too long for suitors to propose. He gave women a single day in a leap year to pop the question – the last day of the shortest month, with the tradition then taken to Scotland by Irish monks.

Different studies all point to exceptionally low numbers of female marriage proposals. According to wedding planning site Tie the Knot, less than 1 per cent of proposals in 2017 were made by women. A similar study by CBS indicated females popped the question to their partner in five per cent of marriages.

Beverley says: “Women are capable of asking a man for his hand in marriage on any day of the year. They don’t need a leap day to propose. However, the tradition surrounding February 29 may prompt some to act and it certainly makes a memorable date for either partner to pop the question.

“The leap day wedding proposal is a reminder of a different era, and it’s a harmless custom. Tricker Bridal’s collection also mirrors past times, with stylish gowns inspired by Hollywood glamour of the 40s, 50s and 60s.”

For any brides thinking about making the leap, they might be convinced to act by viewing the new Tricker Bridal collection of gowns. Our capsule collection oozes a classic Hollywood feel, summed up in the style and sophistication of iconic actresses like Audrey Hepburn, Marilyn Monroe and Rita Hayworth.

By using inspiration from dressmaking patterns of the era, and applying the intricate cutting techniques they require, bespoke gowns for brides seeking timeless beauty are created.

Our collection includes The Anna, a gown is based on an original 1957 German design. It has a deep set, tasteful neckline, tiny cap sleeves created from the inlaid pleating in the upper bodice and a midriff that curves upwards to create a graceful silhouette. An attached train reaches the dress hemline and is finished with an extravagant bow. It has a row of hand-covered fabric buttons over the zip at the centre back of the dress. 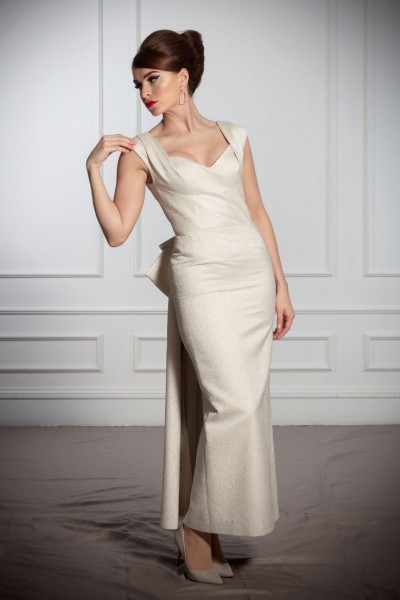 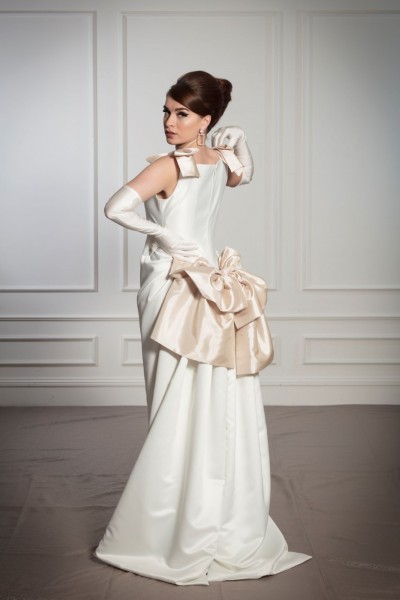