It Started With A Gift

Christmas presents seem to have had an inordinate influence on my love of sewing and dressmaking.

At the age of seven, Santa brought me a toy sewing machine, which I would love to say I played with until it fell apart. But no. My reaction was to cry (other might say I threw a tantrum …) and claim that I didn’t want the small one, I wanted my mum’s one.

And so it came to pass that from the age of seven I was hammering out ensembles for my dolls on my mother’s Pfaff which she had from the days before she married. Currently it resides in mum and dad’s loft, and I’m sure it could still do the best straight stitch ever.

Another (tantrum free) Christmas and I received a fashion template kit complete with different bodice, neckline, sleeve, skirt and hat shapes and loads of patterned paper from which to cut the shapes to create unique outfits. Heaven for me – and probably for my long-suffering mum and dad.

Saturday afternoons were also a huge influence when I spent hours watching black and white films with my grandma and mum. It seems that any woman going out for dinner or cocktails in one of these films was in full evening garb including full length gloves - you can see the glove influence in the Tricker Bridal dresses.

Graduating into colour I was swept up into Audrey Hepburn gowns in My Fair Lady particularly the racing scene gown and the ubiquitous Breakfast at Tiffany’s LBD. There go those evening gloves again…

All my film fantasies were wrapped up together in the scene from Gone With The Wind where Scarlett O Hara, intent on wooing an imprisoned Rhett Butler to give her money to save Tara, but, finding herself bereft of a fitting gown, rips the green velvet curtains from the windows to rustle up a full crinolined skirt.She even fashioned a hat from the remnants. It’s hard to choose between this and the Scarlett-woman dress (or Harlot O’ Hara dress) she wears later in the film with Rhett Butler telling her that nothing modest or matronly will do for this occasion.

By the time I graduated to Marilyn Monroe films I had a sketch book in my hand and was drawing what I loved, but was unaware would become inspiration for the Tricker Bridal collection today. I remember being indignant that Madonna’s Material Girl dress wasn’t a patch on the original Diamonds Are A Girl’s Best Friend gown.

I found myself with a pencil in hand in front of the TV once more recently when glued to The Marvellous Mrs Maisel.  Fifties fashion to die for – and also reminiscent of my mother’s own wedding dress which she used to let me dress up in as a child and a teenager. Sadly, my days of fitting that are long gone!

So, I have much to thank Santa, and my mum, for in igniting and fueling a lifelong love of dressmaking.

By the way, my brother got an astronaut suit complete with space helmet for his Christmas the year of the sewing machine tantrum.

No sign of NASA signing him up even now! 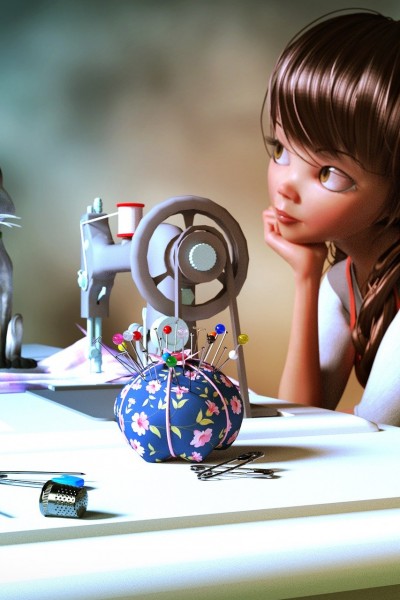